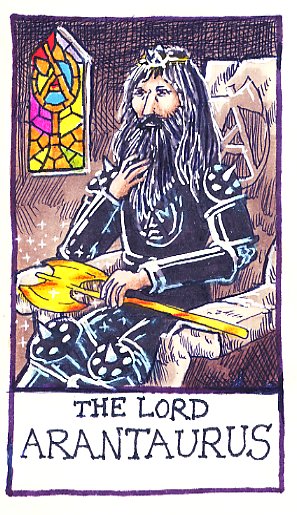 An orphan  from the fierce nomads of the great Ak-Kalbarr desert, raised
in the lush, green Port of Nyeer, the young child named 'Bertrand' was the only solace of
the elderly retired warrior Adelard Arantaurus. From an early age, Bertrand deamed of
adventure, and of making a name for himself.

As a young man, Bertrand set out to seek his fortune, following ever more daring
and dangerous paths to glory. Finally there came the moment where he had gotten
into danger so great, there was no hope for survival.

Facing down a great and ancient dragon, his keen abilities and
powerful limbs were of no use against such a great and armored foe.

Cast violently down by the cruel monster, Bertrand landed square in the wyrms
vast hoard of treasure. By the rarest of chances, his hand closed around the
handle of an enchanted axe of godly power, just as he was swallowed whole
by the horrific creature.

Bertrand did not give up, and he did not give in, and he used his axe,
slowly at first, in the binding constraints of the dragons gut,
and soon with speed, he carved and cut and hacked his
way free though the only vulnerable part of the
gargantuan beast, the rear.

Cored like an apple, the dragon died, and Bertrand, now possessed of vast
wealth from the creatures hoard, and vast power from his godly magic axe,
found himself the wealthiest and most powerful man in all of
his world of Pelenor.

Under the three moons of his world, he had constructed the grandest castle
ever imagined, 20 miles on a side, and ten across, filled with every manner
of wonder, every crop and animal for food, and vast armies
to keep and repair and service and live in it.

He was now the Great Lord Arantaurus, and the mere mention
of his name was synonymous with power, and glory,
and the finest things in the world.

Then, with all of his power and wealth developed to its fullest
potential, the great Lord Arantaurus set out to raise the
people of the world in status, to make the world a
safe, and kind, and bountiful place, where
no person would ever go hungry, no
war would ever be fought, and where no person would
ever be poor, or forgotten, or lost.

It was then that he discovered that his closest counsellors,
had embezzled vast hoards of wealth and sailed far away in the
dead of night.

His closest friends in the court he had created, upon whom he
had lavished only the best, ridiculed him behind his back, and
sometimes even openly, and the captain of his armies
had sold him out to the goblins.

After he had cleaned his house of traitors and thieves and villains,
of the greedy and the honorless and the cynical,
his great fortunes continued to grow, he regained and surpassed
his original wealth, and his armies became invincible.

But now, all he could think about, as he sat,
broken-hearted, alone in his great hall,
was that he had never bothered to thank his
adopted father, Adelard, for raising him,
and that in his rush for glory, and in his dream of
making the world a better place,
he hadn't even known that the old man had died,
long, long ago.