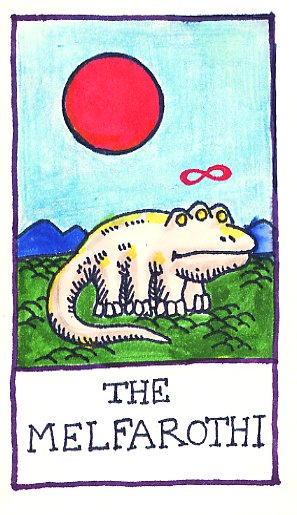 My familiar, if you want to call him that,
comes from Melfarot's World,
a miniature planet in a miniature cosmos,
not that scale is important here.

Melfarot's World has diamond-sparkling rings of
crushed ice, or perhaps crystal,
and is mostly a desert world, with patches
of green.

It is home to the silly Glasgoorin, fierce Sandlions,
amiable desert spiders, and many other creatures,
but has only one sapient species,
the Melfarothi.

Melfarothi are huge creatures, as large as two
elephants, with six legs, a dinosauroid tail,
a huge, gaping mouth, and three independant
eyes.

Oddly, they have no manipulative limbs,
which is very rare for a fully sapient species.

Instead, they are incredibly psionic,
and use their telekenetic power
to construct the vast
airplane-hanger sized marble enclosures,
which protect them from the heat,
and from the sandlions.

If you were to watch them,
you would not imagine them to be a sapient
species. You would think them to be some
sort of giant cows or something,
since all you would see is
that they eat, visit the watering holes,
and go back to the giant marble barns
every evening.

You would likely wonder who built the marble
enclosures, surely the Melfarothi could not have!

Which just goes to show you
the limits of assumption.

At night, the Melfarothi get to work.
they close their three, great, golden amber eyes,
and open their vast, telepathic minds,
and while dreaming,
they collectively run the Charonic Switchboard,
patching through
lost souls
to who, or whatever,
they are seeking.

They also handle universe-to-universe
calls, and offer the lowest rates
for intra-universal dialing.

Still, you would never know all of this,
just by watching a bunch of dinosaur-cow-hippo-things
munch bushes and fart all day.

So, what did you do in those
dreams you still can't remember?