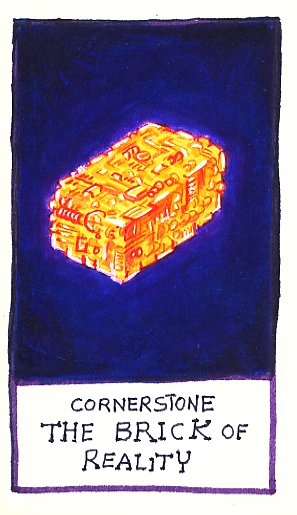 Aealacreatrananda is a Creatrix
who hails from Pentolamerkan, a Mandelbrot-Style cosmos
near the Fifth Conflect of Prux
and like most artists
she has her signature
on her works.

The signature is a golden brick-like Artifact,
embedded in a subdimensional space
within the universes she creates.

The golden brick is a Cornerstone
it holds and supports the cosmos to which it
is placed.

The golden brick Cornerstone is the final thing
she puts into her universes, the very last thing she
Makes , before she leaves the universe
to its own.

Then, she never touches the universe
ever again. She may visit there, play there,
but she will never, ever again, alter or
modify it.

This is because Aealacreatrananda knows that
once a universe has been Created
it belongs to those that move into it,
and no longer belongs to the one
who made it.

This was a lesson she had a hard time learning.
She used to meddle and fiddle with universes,
trying to 'improve' finished works
which is always a mistake,
because once something is done, and offered
it is loved for what it is
and taking it back and altering it
without permission
is a violation of trust
and makes everyone angry.

Aealacreatrananda paid a terrible price
for this behavior
and she wants to remember
to always act better.

Every Cornerstone Brick, golden and gleaming
is covered on every surface
with infinitesimally small
knobs and buttons and dials and switches and meters
trillions and trillions of them,
with labels identifying their function
as all the parameters of
the physical and metaphysical
laws and rules
that define the universe.

Want the local equivalent of gravity
to be a touch less?
There is a knob for that.

Anything and everything that makes
the universe what it is
is controllable from these signature Bricks.

It would be as easy as flipping a shining toggle
or adjusting a golden slider switch.

It is vaguely ridiculous, of course
because no Creatrix or Creator would need
such a thing to change such matters.

It is there as a promise
that nothing will be changed.

How valuable the wisdom to not change things
despite the power to do so.

How valuable the wisdom that
when an artwork is done,
it then belongs
to those that it was made for.

Domination of Artistic Things ends
when the job is done.

The deepest act of love is
embracing the whole of something
or someone
and cherishing every bit of it
just as it is.