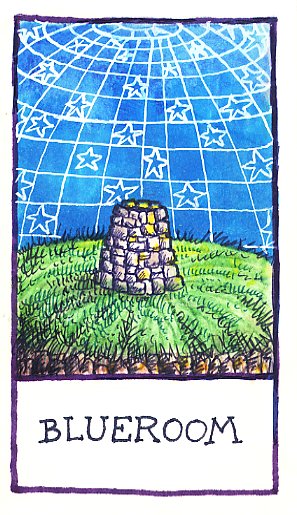 A strange dream, once, of playing in an old, abandoned house
a dozen children or so, the game of hide-and seek.
Suddenly, strange military troops surround the house
and begin to slaughter without mercy.

Running, fleeing, the game of hide-and-seek
had become life or death.

A ruined closet, only near the top, just shy of the ceiling,
is bolted a rusting, square metal frame, with rounded corners.
It is held in place by long bolts to the sides of the
closet walls.

Through the frame is the purest of blue skies
not a cloud in sight, nor the sun
just pure endless blue.

There is broken wooden ladder enough to prop up
against the closet walls, before the soldiers
make the second floor.

Scramble, climb! Up into the strange, impossible sky
that shines through a suspended frame
just below the ceiling of
a ruined closet, in an abandoned house.

A few childeren make it,
past the frame it is the inside of an ancient stone well.
Another frame is bolted there, opening upwards,
suspended in the well by long bolts.

Careful climbing over the lip of the well
soft green grass, something like grass, spreads out
as though the crown of a rounded hill.

The soldiers escaped, sighs of relief.
The air is so very still, and warm and clear.
There is no horizon, only sky. No clouds, and no sun.
Where does the bright, clear, summer light come from?
It is such a mysterious place.

But most mysterious of all is the curve of the hill,
which slopes down a perfect dome, the edges lost
in deep blue, sky blue, a dome of grass atop
an endless cylinder with no bottom,
and no world below it,
only endless aching sky
devoid of cloud or sun.