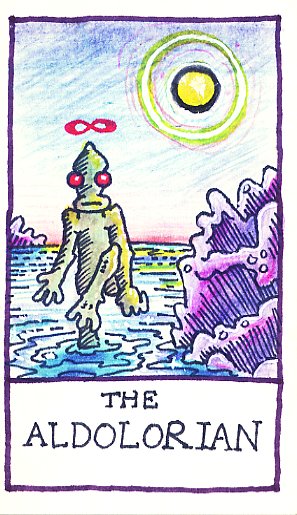 In a small pocket universe, in the tiny Laughing Light Galaxy, is a miniature planet called Aldoloriyah,
which orbits a small star called Oreethgon. The planet Aldoloriyah has no seasons, is always
comfortably warm, and each day lasts the equivalent of but three hours long.
The entire planet, ancient beyond belief, has eroded and smoothed out so that it is covered
in an ankle-deep luke-warm sea, dotted with the occasional purple jade
outcroppings, and small, slightly deeper pits and pools.

There, perpetually dancing around the watery pits are the native Aldolorians
who occasionally feed upon the lush pink Pooji plants that grow within
the pools and pits.

The Aldolorians dance simply and without rhythm in circles around the Pooji pits, while a select
few sit on the jade mounds and watch them intently. Occasionally they change places, and a dancer will
sit, and vice versa. No one knows why they do this and little else.

Learned studiers of studysome things assure us that the Aldolorians have exceptional
brains, and should possess vast intellects, yet they have only two words in their
vocabulary, their collective name, and the word "Pooji".

There is a story told in that galaxy that the Aldolorians were once vastly powerful,
and some even claim they were once ancient gods now retired; certainly they seem never to age or die.
It is hard to tell, though, because they are all identical.

But I have heard it said from knowing knowers that the Aldolorians are holding their planet
in place with their dancing, and that should they ever stop, the planet would
fade away altogether from the universe forever.

With such awesome power from such a minor act, do you not wonder why they
would bother to waste their time on such a useless planet?