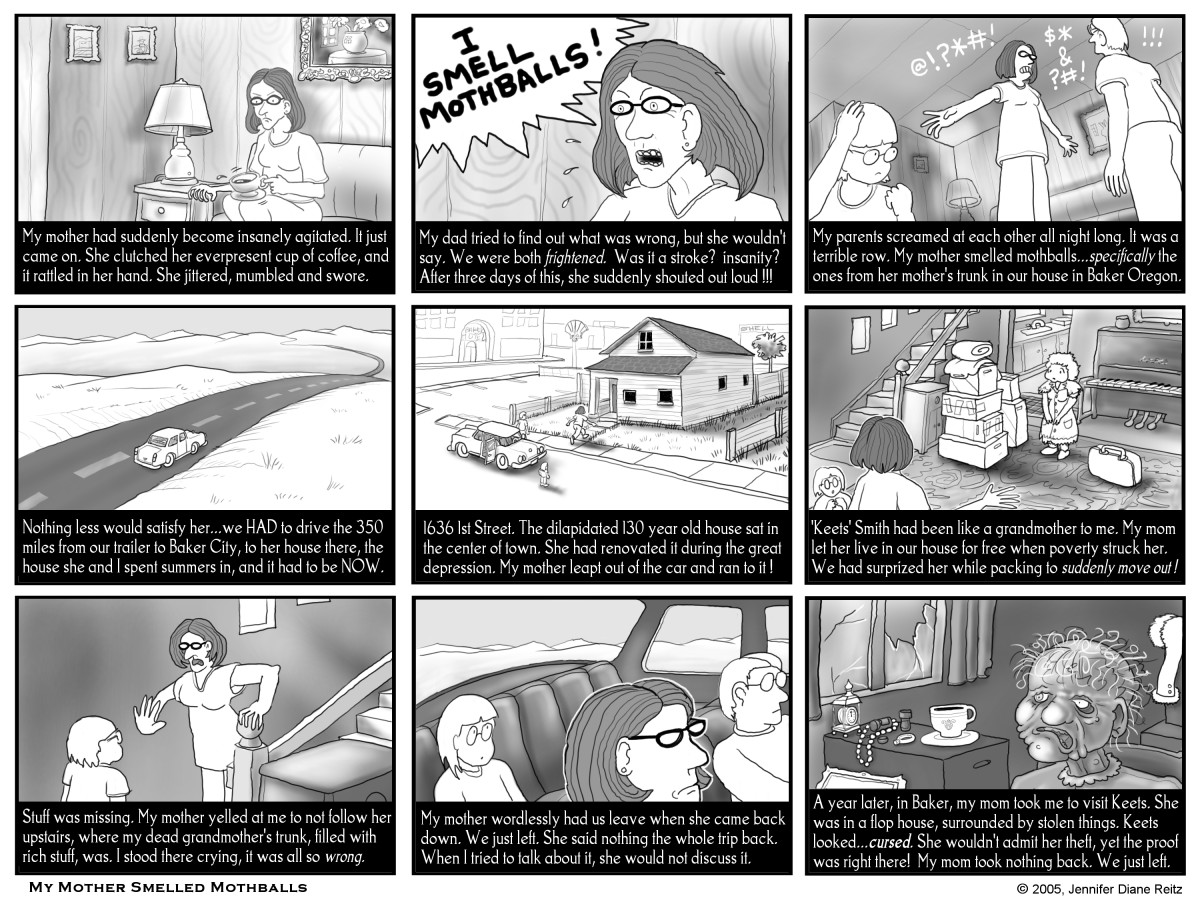 I never knew Keets real name. I had grown up, spending every summer in Baker, in our house there. I remember going to visit Keets Green Stamp Store outlet. That was how she made her living. Her house, when she owned one, was right next door to my mother's house. So, I saw a lot of her during my summers. My maternal grandmother was long dead, and my paternal grandmother was not allowed around, so...Keets was the grandmother I never had.

Somehow she lost her Green Stamp outlet, and then was not able to pay the taxes on her house. Facing homelessness, my mother offered her a golden deal: all she had to do was to continue to be nice to me, and to take care of the house during the winter, and Keets could live there, rent free, indefinately. It was a supreme act of charity and kindness. Keets house was soon torn down, and in its place was built the Langrell Mortuary...you see, my mother's house was so very old that it was exactly in the very center of town, right between the Baker Hotel and the City Hall, and the block had be re-zoned as commerical property. Houses were not affected though, as long as they never changed hands.

Upstairs, in the front room of the Baker house was a literal treasure chest. The whole house was chock-a-block with the remains of my mother's family fortune...her parents had owned a large cattle ranch, and they were very wealthy indeed. So my summer house, as small as it was, was stuffed with gold and silver items, fine porcelain from China, elaborately carved chairs from Europe, and sculpted picture frames gilded with gold leaf.

But upstairs was where the real treasures were: incredible dresses from history, ball gowns, diamond tiaras, diamond rings, ruby rings, emerals, real pearls as large as marbles, fur coats of exotic animals, and silver and gold trays and baubles, like clocks and tea sets. Most of which were kept in a gargantuan portmanteau trunk...if you have ever seen the Tom Hanks movie 'Joe Versus The Volcano', THAT kind of trunk. Only bigger. It was huge. And to keep the moths at bay....many, many mothballs, of a kind no longer made. A very unique smell.

It was amazing to me that my mother could smell that trunk being opened and ransacked 350 miles away. According to parapsychologists, such an ability is called 'Clairolfactance', but for me and my dad, it was a very frightening time, for the power of it was so terrible that it nearly drove my mother to violence...when I say that the only thing that would satisfy her was going to Baker NOW, I very much mean just that. She was beyond anger, and beyond reason in that time.

In doing this cartoon, something struck me for the very first time...Keets had gone from being healthy and attractive in a 'Mayberry Grandmother' sort of way, to becoming what looked like a zombie, an undead heap of rotting flesh in only one year. The change was stomach-turningly upsetting, and I could barely look at her. I was surprised that my mother just talked calmly with her during that last visit to the flop-house. My mother asked Keets only once to admit having stolen her stuff, and then dropped the subject. She had me sing Keets a song, and be nice!

As we drove away, I was still angry at being betrayed and stolen from...some things precious to me had been taken too.

My mother just said, very calmly, almost in a satisfied way, "Keets has already been punished. Let it go."

I wonder, now, just how much my mother actually did learn from her occult-studying Spiritualist mother, way, way back when.