In The grim Darkness Of The Present, There Are Miniatures To Be Painted

One day I stopped into a Games Workshop store inside a mall. The minatures caught my eye, they were beautiful. I bought a copy of White Dwarf to see more of them. Inside were these aliens called the Tau. I fell in love with them. Another few White Dwarf magazines later, they offer a free plastic model with the magazine. I paint it, and it isn't bad. Eldenath likes the Eldar, so I buy her a kit and me a pair of Pathfinders with rail rifles. We paint. We like. Over the course of a year, we gradually, slowly, put together our armies, and the planet Vas'Quez to fight over.

The Planet of Vas'Quez 4, located within the third expansion sphere of the Tau, is a very ancient planet. It is rumored to have been an Eldar world, once, and some call it 'Calentar'. Following rumors that desired Eldar Webway and Warp technology might be excavated for the Greater Good if the planet is colonized, young Commander WarmRain, one of the original safety testers of the experimental XV22 Battlesuit division is unceremoniously promoted and shipped out. With her are a contingent of inexperienced Fire Warriors, newly promoted Stealth and sniper teams, barely able battlesuit pilots, trigger happy Rail Rifle nuts, some disgruntled Kroot, a group of nagging, disgraced Etherials, and a swarm of artificially intelligent Gun Drones programmed by a human Gui'La to think they are cartoon characters.

It is going to be a rough command.

The Calentar Eldalon Eldar
Click Image Above To Enter

The Planet of Vas'Quez 4 is not called that by everyone. To the Eldalon, a weary and exiled branch of the ancient Eldar race, who have been traversing the Webway for centuries in search of their long lost Craftworld, the place is called 'Calentar'. And this Calentar, which they have just recently discovered, sure seems a lot like a partially-destroyed vision of their lost Craftworld of Calentar, and it would be cause for jubilation except for one thing - those pesky upstart Tau have gone and set up camp!

They'd ask the Tau politely to leave, except that if they did that, they would lose the wonderful satisfaction of kicking their punk asses back into space. It just wouldn't be right, to miss out on that. 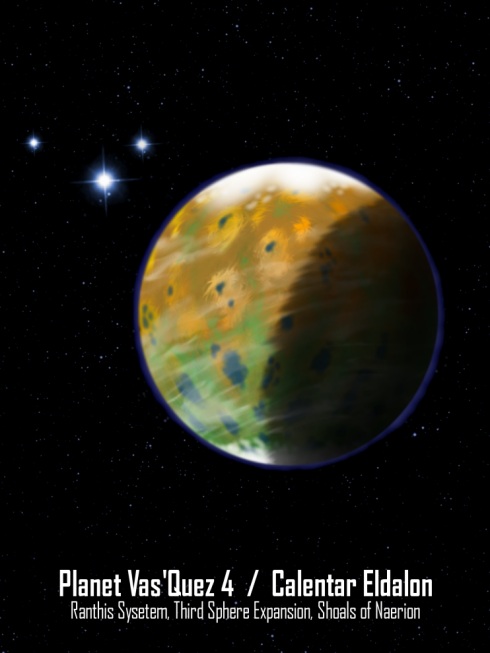 The Planet In Question
Click Image Above To Enter

The Planet of Vas'Quez 4, also called 'Calentar', and many other things besides -most of them rude- is home to the 40K battles that Eldenath and I enjoy together. In here you will find out more about the world we battle over, and what the progress of our battles is.