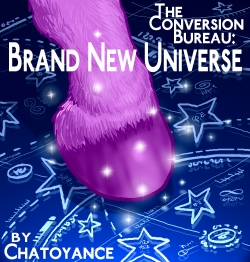 The Conversion Bureau genre was created on March 23rd, 2011. I choose to celebrate the anniversary of the humble origins of one of the most potent and unique of all MLP:FIM subgenres of fanfiction through the invention of completely original, shockingly new visions of the central concept.